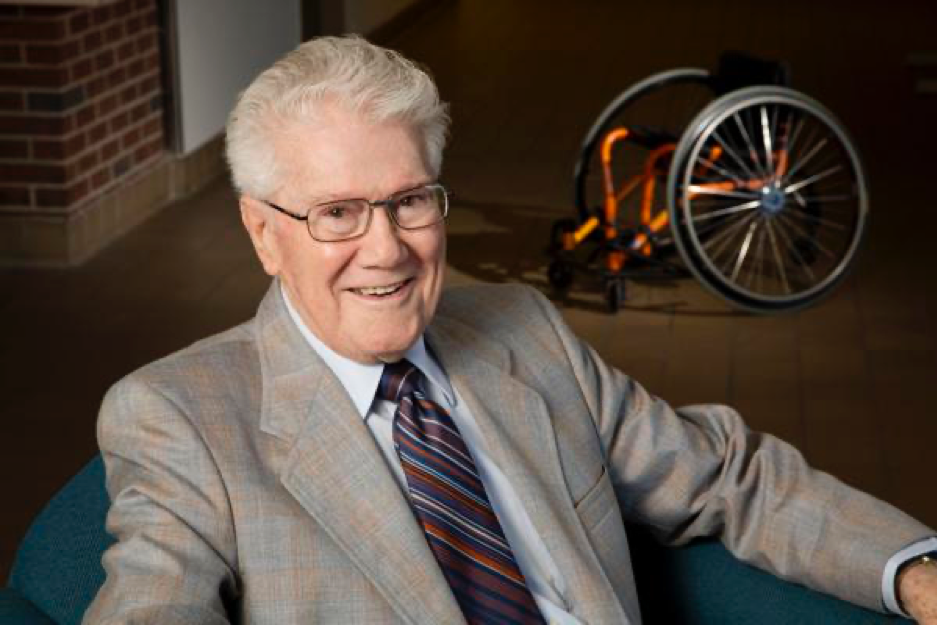 Dr. Tim Nugent, who began the University of Illinois Disability Resources and Educational Services along with pioneering wheelchair basketball and was the first coach, was recently honored by the Naismith Memorial Basketball Hall of Fame with its Bunn Award Lifetime Achievement Award. Dr. Nugent, who passed away in 2015 at the age of 92, will be honored on August 28-30 during the Hall of Fame Enshrinement weekend in Springfield. Mass. He also was a 2019 inductee into the IBCA Hall of Fame.

More to the story courtesy of the Champaign News-Gazette’s Bob Asmussen. 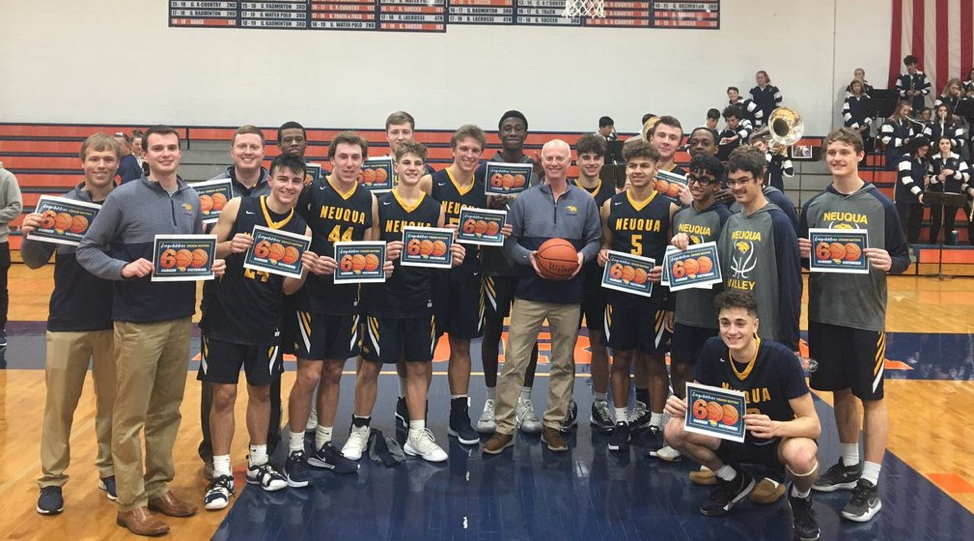 Naperville Neuqua Valley Boys Coach Todd Sutton celebrates career victory # 600 after his Wildcats defeat DuPage Valley Conference rival Naperville North on January 28. In 31 seasons, Coach Sutton has accumulated 448 wins at Neuqua Valley and 162 at his first coaching stop at Pecatonica. He was inducted into the IBCA Hall of Fame in 2012. To see more details, click below. 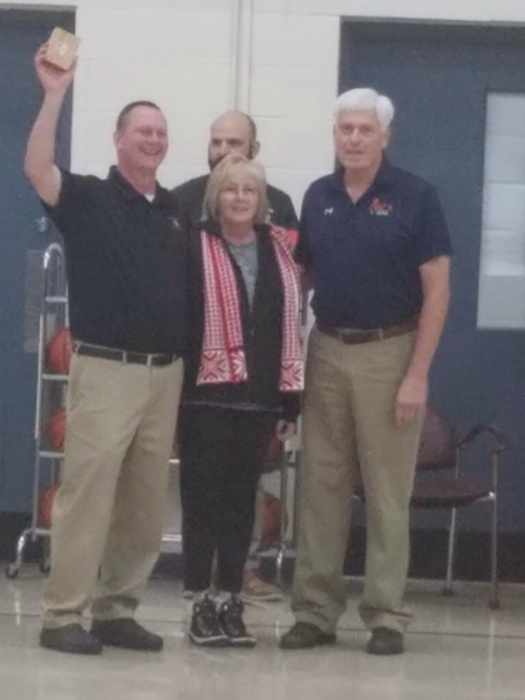 Coach Valla was inducted into the IBCA Hall of Fame in 2015.

Congratulations to Coach Jim Valla and all Elmwood Jr. High players, coaches and fans – past and present – on this great achievement! 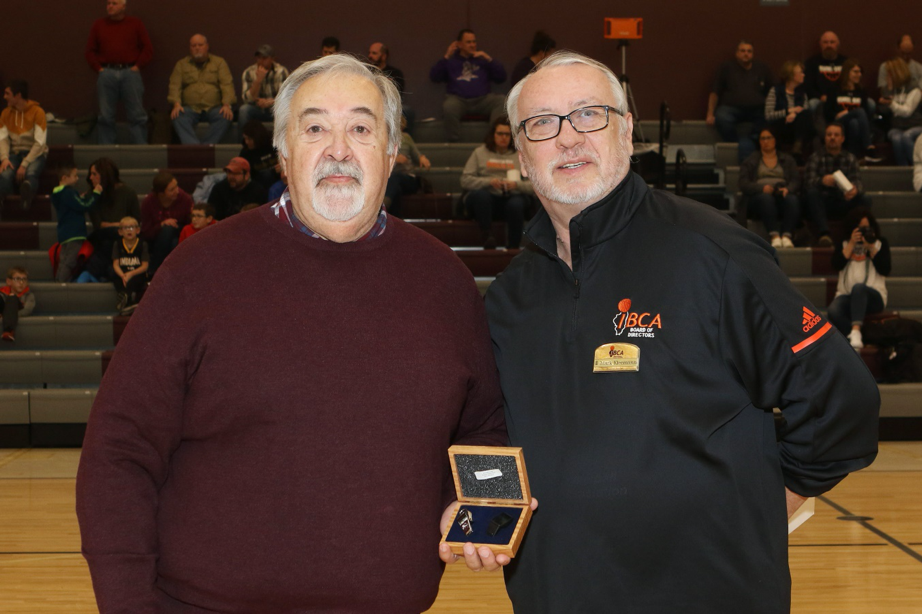 Hall of Fame Coach John Gross earned career victory #800 on Monday, December 23 when his Princeville Lady Princes chalked up a road victory against the Glasford Illini Bluffs Tigers. Thus far at Princeville, Coach Gross has totaled 111 wins and counting. Prior to that, Coach Gross recorded 544 wins and a Class 2A Runners-up finish in 1992 at Bartonville Limestone. At Peoria Richwoods, John led the Lady Knights to 147 victories and a Class 2A State Championship in 2005 and a Class 3A title in 2009. Presenting a “Silver Whistle” to Coach Gross is IBCA Board of Director and HOF Banquet Chairman Mark Kleemann. The presentation preceded a game on Saturday, January 18 at Princeville.

Coach Gross was inducted into the IBCA Hall of Fame in 1994. He currently is #4 on the Illinois Girls Active coaching list and #5 all-time.

Congratulations to Coach Gross and to all teams and players responsible for 800 career victories and counting.

Thanks to Peoria Journal Star sportswriter Johnny Campos for an additional story.

Three esteemed members of the IBCA Hall of Fame were recently selected as the 7th class of Distinguished Media Service Award Winners. The award was established to honor media members who have covered high schools sports for a significant period of time while maintaining a perspective on the amateur events they report.  Check out more information on the IHSA website.

Bob Leavitt began sports journalism at Downers Grove High School and continued his education at the Champaign-Urbana Courier while attending the University of Illinois. His professional career started at the Courier before making the move to Peoria to work for the Journal Star in 1969. But before retiring in 2000, Bob regularly covered the highly successful local prep teams including the Peoria Manual 4-peat from 1994-97. Manual coaches Dick Van Scyoc and Wayne McClain, Peoria HS coaches Chuck Buescher and Tom Peeler, and Richwood’s coach Rod Butler left lasting impressions on Leavitt. Our guess, is that he did the same for them.

Bob Leavitt was selected into the IBCA Hall of Fame in 1987 as a member of the Media.

Neal Ormand was an West Aurora basketball player who helped the Blackhawks win a 4th place finish in 1958. After earning a bachelor’s degree at Yale and a MBA from Stanford, he returned home and was asked to help announce prep games on the local radio. Starting in 1964 and still going strong, Neal has worked for WMRO, WKKD, WBIG, and on television for WLXT. He has worked well over 1500 basketball and 500 football games. His day-time job was as Vice-President of Human Resources at Quaker Oats and W.W. Grainger, Inc. But his passion was “promoting the outstanding accomplishments of our students-athletes in all sports and the excellence of the academic and extracurricular programs of School District 129”. Neal has done that very well.

Neal Ormand was selected into the IBCA Hall of Fame in 1984 as a member of the Media.

Fowler Connell of Danville is 95 years young and still active on the local sports scene. A graduate of the University of Missouri, Fowler began his career in 1949 with the Champaign News Gazette. He became the Sports Editor of the Danville Commercial News in 1952 and became an institution there until his “retirement” in 1989. But in 1990, he turned to radio broadcasting high school and junior college games on WDAN where he remains a staple today. He serves as a regular panelist on sports talk shows and as an analyst for the University of Illinois pre-game segments.

Congratulations to Coach Joe Murphy for achieving career win #800 on Saturday, January 4.  In five seasons as Winnebago Girls Varsity Coach (1981-1986) his 108 victories include 5 regional crowns and one trip to the state tournament in 1985. As the Indians Boys Varsity Coach, (1987-present), Coach Murphy has won 692 games and captured 17 regional titles and five state tournament appearances which culminated into a 4th place, a 3rd place, and three  2nd place finishes.

Coach Murphy was inducted into the IBCA Hall of Fame in 2011. He currently ranks #6 on the Illinois Boys Active coaching list.

Congratulations to Coach Joe Murphy and all players, coaches and fans – past and present – on this great achievement. 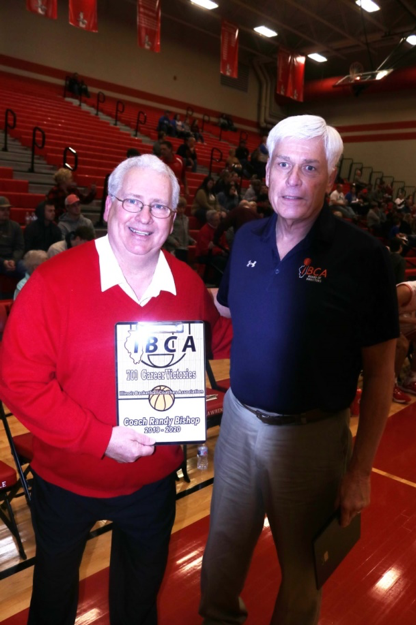 Before the Tuesday, January 7 game with Hutsonville/Palastine Co-op, Lawrenceville High School Coach Randy Bishop along with former Indians Coach and Hall of Famer, Ron Felling,  accept a 1500 school victory plaque from Steve Allen, a member of the Board of Directors and Ken Crawford, Past President of the IBCA and Hall of Fame Coach.

Since 1910, Lawrenceville High School has won 1702 games and captured 40 district or regional titles along with 13 state tournament appearances that have produced two third place trophies and an astounding four IHSA State Championships. Along with numerous conference championships as well as holiday tournament titles, Lawrenceville High School is regarded as one of the all-time great boys’ basketball programs in Illinois.

At this time, the IBCA congratulates Coach Randy Bishop and Coach Felling and all Indians players, coaches and fans – past and present – on this great achievement!

Thanks to Athletic Director Jamie Schultz for coordinating a great evening of basketball in Lawrenceville! 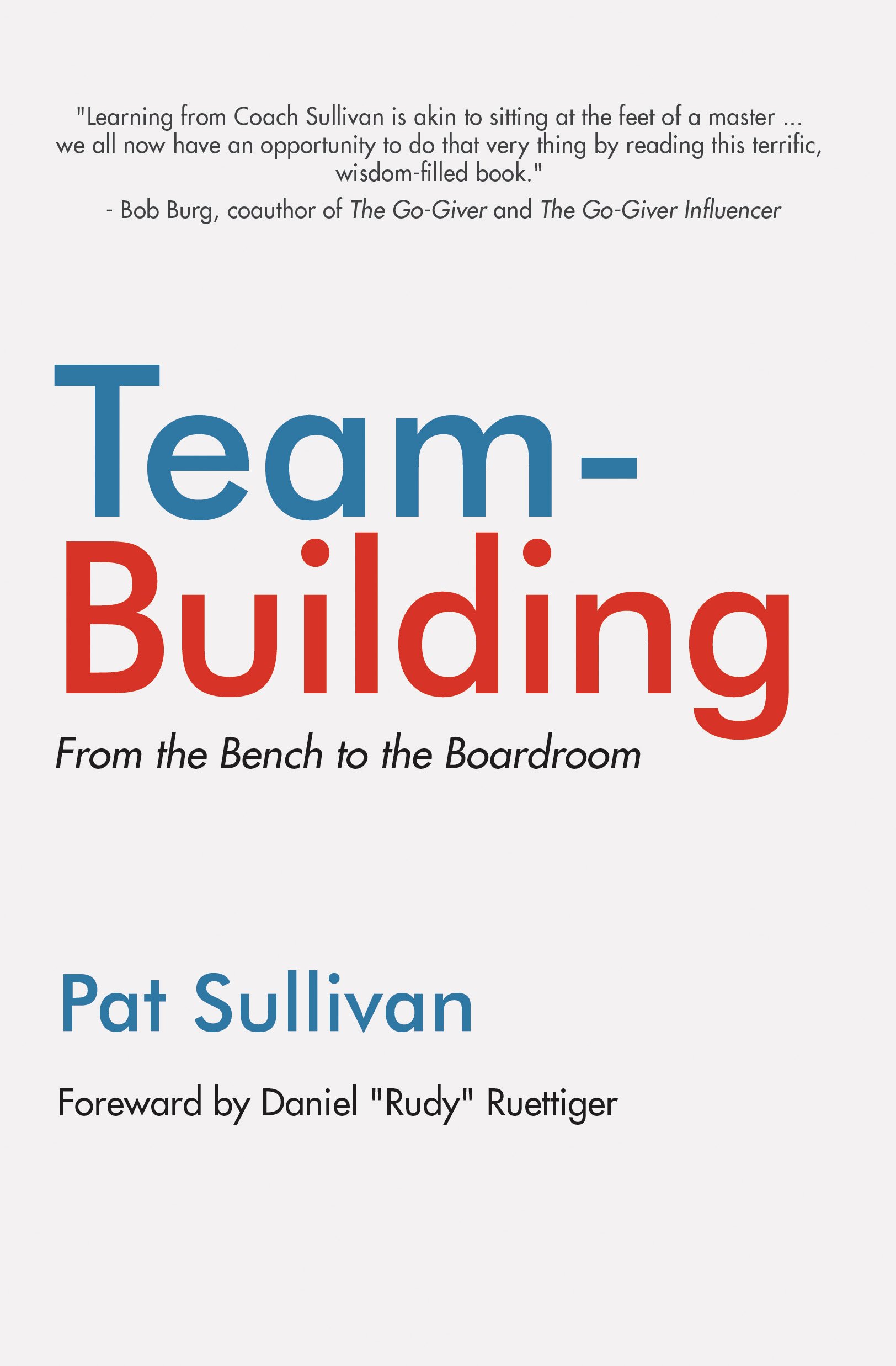 Pat Sullivan, the former University of St Francs basketball coach and an inductee into eight Halls of Fame, has just published his second book, Team-Building: From the Bench to the Boardroom.
In 2003 he wrote, Attitude-The Cornerstone of Leadership. In this book, he used the word , ATTITUDE , as an acronym. The letters stood for Attitude, Teamwork, Toughness, Intelligence, Thank You, You, Determination, and Effort. Sullivan examines each word and how it leads to quality leadership.
In his second book , he offers twenty concepts that he has found in his forty-four years of coaching that lead to quality team-building. Among the concepts presented are: Caring, Failure, Success, Listening, Humor, Discipline, Credit, Critique, and Culture. He first shows how each concept is important in the athletic arena, then examines each concept in regards to building a team in the business world. To no one's surprise, the concepts to building a team in athletics fit perfectly into building a team in business.
Sullivan, who has presented clinics throughout America and internationally, speaks on both Attitude/Leadership and Team-Building. He can be reached at psully100@comcast.net.
CLICK HERE to purchase a copy today!

Neil currently is outgoing president of the IBCA and has been on the Board of Directors for 30 years. As the coach of the Railsplitters, Coach Al has amassed 832 career wins which places him at the top of the active Illinois HS boys list. He trails only the late St. Joseph’s Gene Pingatore (1035) and former Rockford Boylan coach Steve Goers (881) on the all-time list.

Frank Castillo of La Cueva High School in New Mexico was selected as the 2019 National Basketball Coach of the Year.

Congratulations to Coach Alexander and thank you for representing Illinois Basketball!